On Saturday, October 23rd, more than 100 ISKCON (International Society for Krishna Consciousness) centers organized kirtan (prayer) protests across the globe with thousands participating by peacefully chanting while holding signs pleading for protection and justice for minority groups and Hindus in Bangladesh after the last week’s attacks. National media covered many of the protests, including the Times of India and CBC.

The international protest, entitled: “Global Kirtan Protest” began yesterday in Australia and New Zealand with ISKCON members and supporters marching in major cities across the countries. Protests and rallies continued around the globe through India, Africa, Europe, and ended in North America. Demonstrations and candlelight vigils in India took place in the cities of Bangalore, Vrindavan, Ahmedabad, Pune, Kolkata, Dehradun, Mayapur, Goa, and Delhi. These were followed by protests in Buenos Aires, Argentina; Durban, South Africa; Maitighar, Nepal; and Port Royal, Mauritius. In Europe protests took place, most notably in London, England more than 500 supporters gathered, chanted, and danced on both sides of the street in front of the Bangladesh High Commission. In the United States protests were held nationwide, notably, in New York City, in Times Square, and in Washington, D.C., in front of the White House, as well as in Atlanta, Philadelphia, and other locations. Meanwhile, in Canada, the major cities across the nation of Vancouver, Winnipeg, Montreal, Halifax, Ottawa, and Toronto held protests with large gatherings.

Since October 13, 2021, in 30+ districts in Bangladesh:
More than 300 Hindu temples and deities have been demolished or vandalized with Hindu priests killed, Hindu women raped, Hindu houses were looted and burnt. Thousands were injured and displaced.

How can you help?

U.S.A. | Please click here to fill out a short form to send to Congress: https://www.votervoice.net/mobile/HAF/Campaigns/89045/Respond

London, U.K.  | Contact your local MP (using this template) urging them to contact the Foreign Secretary who in turn should approach the High Commissioner at the Bangladeshi embassy in London. We ask the Bangladeshi government to protect its religious minorities. Donate for ISKCON Bangladesh through the Bhaktivedanta Manor: Donate to ISKCON Bangladesh

In an effort to bring international awareness and pressure on the Bangladesh government to take serious steps to protect religious minorities, ISKCON is teaming up with other Hindu groups across the globe to do kirtan protests.

The global event took place on Saturday, October 23rd, 2021 with kirtan protests outside of temples and in high visibility areas across the world that afternoon.

For more information about the crisis: ISKCON Official Report on Bangladesh Attacks

Here is the official poster: 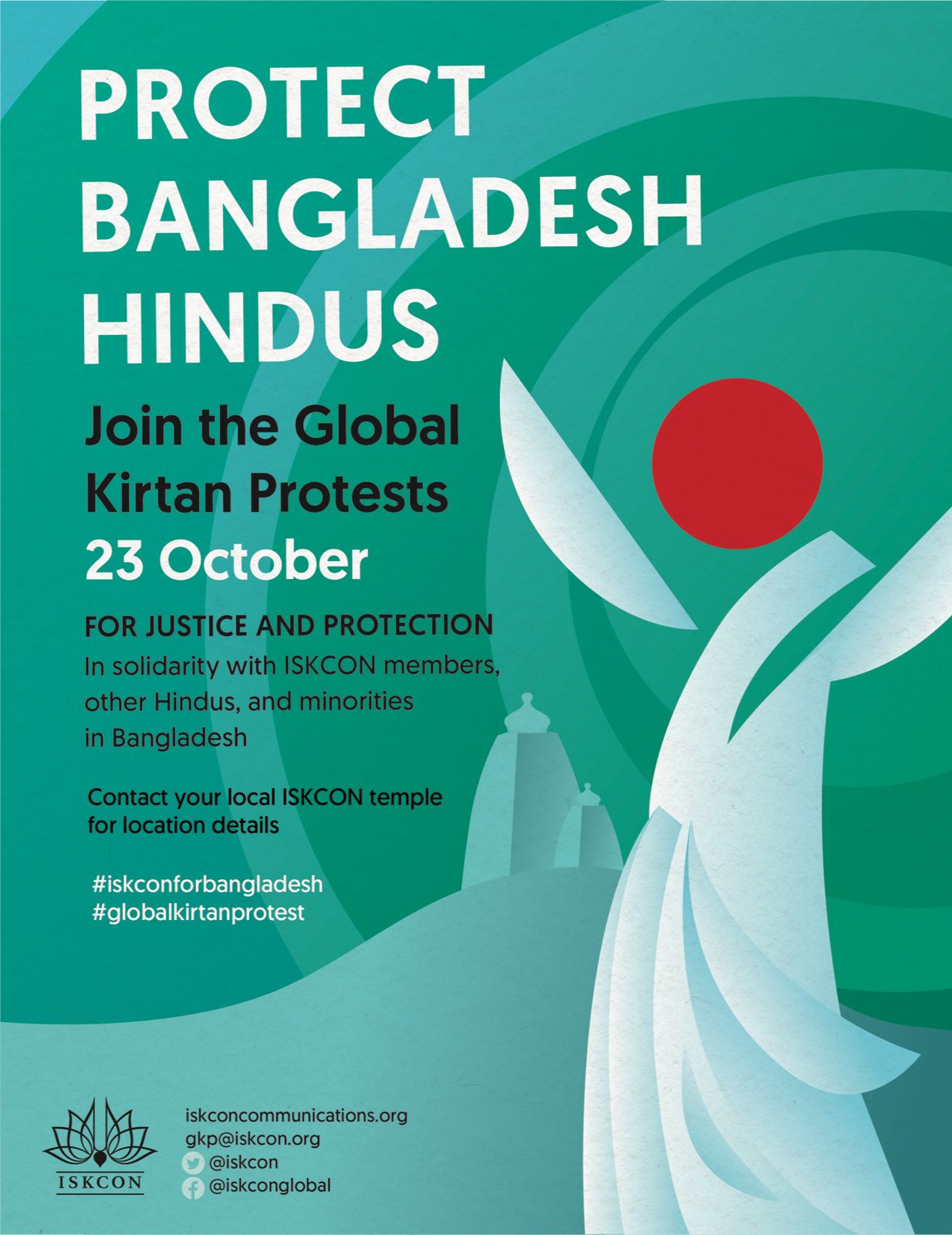